Archive for the tag “new wave”

The MC5 were known for their loud, brash punk rock a decade before punk rock supposedly existed. Their debut album, “Kick Out The Jams” (1969), was recorded live and presented a sonic onslaught of guitars, bass, drums, uncompromising revolutionary politics, sex and drugs. All par for the course in 1969.

Their rallying cry, “Kick out the jams, motherf*ckers” caused the album to be banned by a number of different retailers, propelling it naturally to the Top 30. It even hit Number 45 on the R&B chart.

“Kick Out The Jams” was, in no way, a melodic pop album:

Things changed a year later. Jon Landau, who later worked with Bruce Springsteen, produced “Back In The USA” and imparted a clean, compact sound that was radically different than what it succeeded. And did it ever succeed. 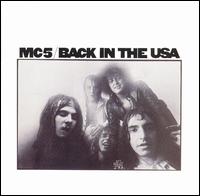 And, its got great characters. Besides Little Orphan Annie and “Sweet Sue too,” there is Streetlight Sammy coming “all the way from New Jersey on his girlfriend’s tips.” He came to meet “skinny leg Pete.” And then there is Sally Baker who “wants to shake her shaker.” They all came to a world-wide party on “Shakin’ street, where all the kids meet”:

“Shakin’ Street” is another song that was years ahead of its time. As I wrote previously, that is a testament both to its influence on everything that came after, and to its overall greatness.