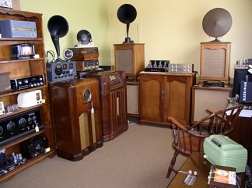 This action-packed episode of The Big Show is overflowing with new music. Of particular note are three artists whose songs, albums (or both) are destined to find their way onto my year-end lists for 2015:

Love Axe kicks off the show with “Only Gonna Tear You Apart,” a hook-filled track, with a bit of “call and response harmonizing,” from their wonderful South Dakota long-player — one of the finest albums released so far this year.

Propeller’s “You Remind Me Of You” made my Top 30 songs list last year. Their new single, “Wish I  Had Her Picture,” may be the band’s best song to date, with its sweet and smooth vocal harmonies nicely complimenting its bouncy rhythm. Look for this one in my Top 10 for 2015; its that good.

Nick Piunti’s Beyond The Static LP somehow manages to up the ante on 13 In My Head which, in retrospect, could very well have been my favorite long-player of 2013. “Head In The Clouds” is third song from Static to be played on The Big Show. Its a pitch-perfect, mid-tempo guitar rocker punctuated by Piunti’s typically fabulous vocals.

But, wait, there’s a whole lot more great new music for your listening pleasure in this season’s fifth show.

The Kurt Baker Combo tear the roof off the house with a blistering live version of Leiber and Stoller’s “Love Potion No. 9.” Dot Dash infuse their immensely catchy “Rainclouds” with a bit of old school punk rock swagger to great effect. Los Breakdowns deliver traditional Power Pop via the late-70’s with “Off The Record” from their wonderfully titled LP, Rock ‘N Roller Skates.

A bunch of 60’s styled rockin’ pop is featured prominently in the fifth show. Those mad scientists of the four-track recorder, Dr. Cosmo’s Tape Lab, check in with some 60’s swing on “Time Enough For Love.” Grab a cocktail by the pool with this one. Roger Houdaille, recording as Plastic Macca, takes the lo-fi 60’s approach in a decidedly different direction with the rocking and rollicking “Art” from one of his two recently released LPs. Smile Factory, a “pop collective,” contribute perfectly updated British Invasion pop on “There She Is.” The Zags deliver some understated 60’s-styled pop with subtle psych undertones on “Messin’ Around” from their rather tasty, recently released self-titled LP.

New music is rounded out by Caddy, making its second consecutive appearance on The Big Show, with the beautiful and swaying “Bring It Back” from an upcoming LP, and by The Surf School Dropouts whose “Should Have Known Better” features sparkling harmonies and a slinky, instantly memorable guitar riff. The entire twenty-seven song tracklist can be found below the embed. Crank up the volume, and check out Pop That Goes Crunch radio, streaming the finest in melodic rock n’ roll 24/7.

5.  The Electric Mess, “There’s Nothing You Can Do”

13. Josh Woodward, “The Rival Within”