Archive for the tag “Donny Brown” 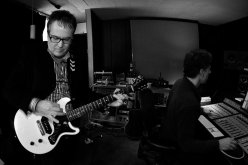 Nick Piunti is on a roll.

Piunti’s 2016 long-player, Trust Your Instincts, hits the retail outlets on September 9. It may be his best effort yet: ten tracks featuring his increasingly sharp and incisive writing, tough and shiny guitar riffing, and the best damned vocals in the entire rockin’ pop world. Even better, Piunti is expertly assisted by some of our other faves: Donny Brown on drums, percussion and backing vocals; Andy Reed on bass and synth; and Ryan Allen on guitars, backing vocals and percussion. In reality, this is classic rock ‘n’ roll with big hooks and expert production. It is also a candidate for album of the year.

Even much better, you can win a free copy of the CD! That’s right, we are giving away three copies of Trust Your Instincts, courtesy of the fine folks at JEM Records.

Here is what you need to do:

Send an e-mail to popgoescrunch@gmail.com by 3:00 p.m. Pacific time on September 8, and answer two questions.

2. What is your favorite ice cream flavor?

Be creative. The best three submissions win. We’ll announce the winners on the morning of September 9.

In the meantime, you can stream the first two tracks from Trust Your Instincts, in full.

Here’s the title track, in all of its Power Pop glory:

And, on “One Hit Wonder,” Piunti pens a tale of a music industry shooting star that nevertheless has universal applicability: