Here’s To You, Mrs. Pace

Back in 1977, I had a very old school seventh grade music teacher. She played the piano and taught us to sing songs like “Erie Canal.” It went like this: “I’ve got a mule her name is Sal/Fifteen miles on the Erie Canal/She’s a good ol’ worker and a good ol’ pal/Fifteen miles on the Erie Canal.” Real cutting edge and contemporary stuff, written back in 1905.

One day, she came to class and said sternly: “I read an article in the newspaper yesterday about this very bad music that is coming over from England. Its called punk rock. There is a group called the Sex Pistols. The music is loud, and they curse and vomit. Do not listen to it.”

I immediately thought to myself, “Wow, this punk rock stuff must be pretty bad. Or maybe pretty good. I gotta check it out.”

I went home and, of course, read the article:

What she had said about the article was mostly true. The group was called the Sex Pistols. They cursed and they vomited. However, this “punk rock” was said to have come originally from America, not from England as she claimed. America would never have generated such stuff. She obviously never heard of the Stooges, the MC5, the New York Dolls, etc.

I was not yet 13 in January 1977. I couldn’t buy something called “Anarchy in the U.K.” The radio wasn’t playing this stuff. And, what would have happened if I came home with something with the words “Sex Pistols” written on it? This came, and went. 1977 was a dark time for music you could actually hear on the radio. The Number One song in the United States at the time was “You Make Me Feel Like Dancing,” by Leo Sayer.

But, a couple of years later, I read about the domestic release of a supposedly “bombastic” record by The Clash. By this time, though, I had a decent bike and some cash. I was able to up to ride up to Westwood one day after school to buy the domestic version of “The Clash,” which I later called “The Green Album”: 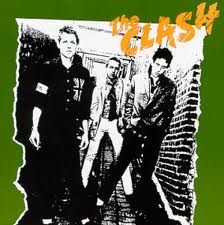 I hadn’t even heard a single song on this record before buying it. But, not only was it supposed to be “bombastic,” it also was the dreaded “punk rock,” the scourge of old school music teachers leading their students in rollicking renditions of “Erie Canal.” And, it had lyrics like this: “All over people changing their votes/Along with their overcoats/If Adolf Hitler flew in today/They’d send a limosuine anyway.”

It was great. I listened to it over and over again. Things would never quite be the same.

One thought on “Here’s To You, Mrs. Pace”