Archive for the tag “The Clash” 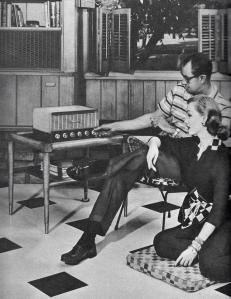 Like Loading...
Posted in Music and tagged Chris Richards and the Subtractions, Gen Pop, Power Pop, Powerpop, Sugar Stems, The Clash, The Cleaners From Venus, The Click Beetles, The Hazey Janes, The Jam, Toxic Melons, Translator | Leave a comment

The intrepid curators of the PowerPop blog unearthed and posted a wonderful piece of formerly lost pop music history — a 20 year-old “Lewis” Reed making like Dion a couple of years before the Beatles first landed in the United States. You can check out “Lewis” bouncing his way through the minute-fifty nine “Your Love” right here. It’s a nice surprise.

I bring this up because the tributes to Reed following his passing focused generally on the same things. AP’s tribute to the “iconic punk poet” is fairly typical:

His trademarks were a monotone of surprising emotional range and power; slashing, grinding guitar; and lyrics that were complex, yet conversational, designed to make you feel as if Reed were seated next to you. Known for his cold stare and gaunt features, he was a cynic and a seeker who seemed to embody downtown Manhattan culture of the 1960s and ’70s and was as essential a New York artist as Martin Scorsese or Woody Allen. Reed’s New York was a jaded city of drag queens, drug addicts and violence, but it was also as wondrous as any Allen comedy, with so many of Reed’s songs explorations of right and wrong and quests for transcendence.

Although I have no real quarrel with that, it forgets that Reed could also pen the perfect melody. The 20-year-old “Lewis” heard on “Your Love” persisted through Reed’s later excursions into “slashing” and “grinding” guitars to write some of the best and most enduring pop music of the past fifty years.

One of the best examples of Reed’s pop instincts in action is “Stephanie Says,” which was recorded in 1968 but did not officially see the light of day until 1985. Its lilting strings and celesta (a keyboard instrument with metal plates struck by hammers to produce bell-like tones) give it a baroque feel. The power of the lyrics derive from the way the words sound together instead of whatever they might mean:

Here it is, complete with lyrics:

The celesta also “propels” another one of Reed’s pure pop masterpieces, the lush and daydreamy “Sunday Morning,” the track that kicks off The Velvet Underground With Nico. Its words are also memorable, and stick in your mind, based on how they sound strung together so simply and precisely:

Watch out, the world’s behind you/There’s always someone around you who will call/It’s nothing at all

I first discovered Reed and The Velvet Underground in the 80s when my I was rocking to The Clash and other kindred spirits. “I’m Waiting for the Man” and “Heroin” were, and remain, great songs about “the downtown Manhattan culture of the 60s.” But I always preferred “Stephanie Says” and “Sunday Morning,” as well as songs like “Sweet Jane,” “Pale Blue Eyes” and “What Goes On.”

A friend posted recently on the scheduled closing later this month of the Santa Monica Civic Auditorium. This prompted memories of bands seen there in days gone by, particularly back in high school. The Jam, The Clash, XTC and even U2 played there back in the late-70s and early-80s. I commented that our parents had driven our 15 year-old selves to and from “The Civic” one night to see 999 and the Dickies.

999 and the Dickies! Now that’s really going back in time. I can’t even recall the last time I heard either of those two bands. The crowd at The Civic went nuts that night in March 1980 when 999 played their then-signature tune “Homicide.” 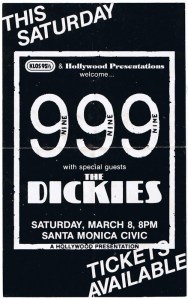 But that also got me thinking. Our parents took us to and from a whole lot of shows before either of us could drive. The Plimsouls in Hollywood and The Who at the Los Angeles Sports Arena came first to mind.

But I also recalled a parent-facilitated evening at either The Starwood, The Whisky or the Roxy to see The Naughty Sweeties back in ’79 or ’80. The Naughty Sweeties? They had a local “hit” back then that garnered a lot of air time on Rodney Bingenheimer’s Sunday night show on KROQ.

“Alice” was not necessarily a typical tune to grace the airwaves in the late-70s. It starts with an image of the aftermath of a friend’s drunken sex in a car with the singer’s girlfriend: “Pink panties on your rear view mirror/Beer cans in the back/I see that you’re going out with Alice/Won’t you give my girlfriend back,” it begins. Not exactly “I wish that I had Jessie’s girl.” More like “You had Jessie’s girl.”

The song also features great hooks, a driving melody, Ian Jack’s increasingly frantic vocals and a pounding chorus about the supposed friend taking advantage of the “hot blooded” Alice. “Why you want to make it when you know that she’s my girl?” Jack pleads as each chorus concludes before the tension begins again.

All of this kept “Alice” in my mind for more than 30 years even though I have no idea when I had last heard the 7-inch pictured at the top of the page. Luckily, someone out there ripped it from vinyl and stuck it up on You Tube:

The Naughty Sweeties called it quits around 1982, although the internet continues to memorialize the happening of a reunion show in 1987 to celebrate the 10th anniversary of Madame Wong’s, another local Los Angeles independent music hot spot from the old days. Esther Wong recalled paying the band only $60 to play at her club in 1979. “They had a $300 bar tab,” Wong noted.

Drinking the profits. A venerable tradition in rock and roll.

Like Loading...
Posted in Music and tagged 999, KROQ, music, pop music, Power Pop, Powerpop, Rodney Binghenheimer, Santa Monica Civic Auditorium, The Clash, The Dickies, The Jam, The Naughty Sweeties, The Plimsouls, The Who, U2, XTC

Here’s To You, Mrs. Pace

Back in 1977, I had a very old school seventh grade music teacher. She played the piano and taught us to sing songs like “Erie Canal.” It went like this: “I’ve got a mule her name is Sal/Fifteen miles on the Erie Canal/She’s a good ol’ worker and a good ol’ pal/Fifteen miles on the Erie Canal.” Real cutting edge and contemporary stuff, written back in 1905.

One day, she came to class and said sternly: “I read an article in the newspaper yesterday about this very bad music that is coming over from England. Its called punk rock. There is a group called the Sex Pistols. The music is loud, and they curse and vomit. Do not listen to it.”

I immediately thought to myself, “Wow, this punk rock stuff must be pretty bad. Or maybe pretty good. I gotta check it out.”

I went home and, of course, read the article:

What she had said about the article was mostly true. The group was called the Sex Pistols. They cursed and they vomited. However, this “punk rock” was said to have come originally from America, not from England as she claimed. America would never have generated such stuff. She obviously never heard of the Stooges, the MC5, the New York Dolls, etc.

I was not yet 13 in January 1977. I couldn’t buy something called “Anarchy in the U.K.” The radio wasn’t playing this stuff. And, what would have happened if I came home with something with the words “Sex Pistols” written on it? This came, and went. 1977 was a dark time for music you could actually hear on the radio. The Number One song in the United States at the time was “You Make Me Feel Like Dancing,” by Leo Sayer.

But, a couple of years later, I read about the domestic release of a supposedly “bombastic” record by The Clash. By this time, though, I had a decent bike and some cash. I was able to up to ride up to Westwood one day after school to buy the domestic version of “The Clash,” which I later called “The Green Album”:

I hadn’t even heard a single song on this record before buying it. But, not only was it supposed to be “bombastic,” it also was the dreaded “punk rock,” the scourge of old school music teachers leading their students in rollicking renditions of “Erie Canal.” And, it had lyrics like this: “All over people changing their votes/Along with their overcoats/If Adolf Hitler flew in today/They’d send a limosuine anyway.”

It was great. I listened to it over and over again. Things would never quite be the same.