Archive for the tag “Not Lame Recordings”

Starbelly’s Lemonfresh: Still Tasty After All These Years

A piece I wrote last year on the digital download-only reissue of the expanded version Starbelly’s 1998 release, Lemonfresh, has evaporated into the digital ether. So I am updating it and re-publishing it, here.

Back in 1998, three guys put out a limited release, eleven track CD of Rubber Soul/Big Star-oriented chiming guitar pop on Not Lame Recordings called Lemonfresh to great acclaim. The CD sold out, and disappeared. Not Lame reissued the CD in 2009 with twelve bonus tracks and a CR-R of a live show. Not Lame went out-of-business in 2010. You can buy the CD re-issue of Lemonfresh used for about $60 — if you can find it.

But nothing really dies in the age of the internet. So enter Futureman Records. Futureman, though, does not merely issue “records.” It also re-issues lost Power Pop classics, exclusively by digital download, from its perch on Bandcamp. The twenty-three track reissue of Lemonfresh is available now for the princely sum of $10, in virtually any digital format you desire.

Lemonfresh is as fresh today as it was fourteen years ago. The “record” is seventy-plus minutes of non-stop hooks, melodies, chiming jangly guitars, occasional big beats and consistently clean production. It has all of the stuff to be a massive hit in a different world. But in our world, we can just drink down its poppy goodness.

The opening track, “This Time,” sets the tone for all that comes afterward. It’s a one-minute forty-three second look at romantic disentanglement — attempted, imagined or achieved — set amid perfect vocal harmonies, concise guitars and driving beat:

“She’s So Real” is the kind of song that will play in your head for hours after listening, with its direct statement of lyrical and musical purpose, and the tasty interplay between the lead vocals and background harmonies:

“What You Will” might very well have the blueprint for half of everything Wilco has done since 1999’s Summerteeth. It’s all about personal illusion, or delusion — “Look under your bed/it’s all in your head” — punctuated by strings and those pitch perfect harmonies, once again:

Indeed,Lemonfresh features just about the consistently best vocals you will hear on any rock record, well, this year — even though it was recorded in the late-1990s. Guitarist Cliff Hillis and bassist Dennis Schocket trade lead vocals over the course of the twenty-three tracks, lending the songs a distinct yin-and-yang feel that keeps the proceedings all the more interesting over the course of an hour-and-change. And, as is required in this genre, Lemonfresh features a song about a particular girl. “Letters To Mary” closed the original 1998 release, and would have felt at home on Abbey Road:

There truly is not a weak track on the expanded version of Lemonfresh. That’s quite an achievement over twenty-three songs. Play it in your car and it will keep your head bopping throughout that long, boring commute.

Although Hillis left the band after Lemonfresh was released, and the band hasn’t put out anything new since 2002, he has said that the original members of Starbelly, along with his replacement, are working on new songs for a future release. The band also in playing at one of the shows in the New York installment of this year’s International Pop Overthrow.

In the meantime, though, give Futureman 43 cents for each of the twenty-three songs on Lemonfresh. That’s a steal.

Starbelly’s “Mother Of Pearl”: A Turn Of The Century Classic

As I noted the other day, I recently contributed a piece on the expanded version of the second re-release of Starbelly’s 1998 Lemonfresh to a relatively new site call The Cultural Purveyor. I guess my job there is to spread the word about resurrected, lost Powerpop classics since I  wrote previously on that site about the re-released and expanded version of Cotton Mather’s 1994 masterpiece, Kontiki.

I digress, although Starbelly has become a mainstay on my morning and afternoon commutes to and from work. That brings me to the track that first drew my attention to the band. That would be the original version of “Mother Of Pearl,” the re-recording of which appeared on the band’s second long-player, 2002’s Everyday And Then Some.

On its own, the “official album” version of “Mother Of Pearl” stands out as a stellar track, one of the best on Everyday. The real brilliance, though, is in the original version song, recorded with the band’s initial three-piece line-up. Its occasionally muffled vocals set against a strong, melodic chorus, ringing guitars, and typically beautiful harmonies will lodge the track firmly in your subconscious for days. If that’s not enough, the subtle hip-hop rhythm and long fade-out with mysterious whispers gives the whole thing an American gothic feel, an effect that is enhanced further by the song’s official video:

The original version of “Mother Of Pearl” is available on Not Lame’s Six Years of Powerpop, which can still be purchased digitally or streamed on services such as Rhapsody. Its easily in my Top 40 of all-time. 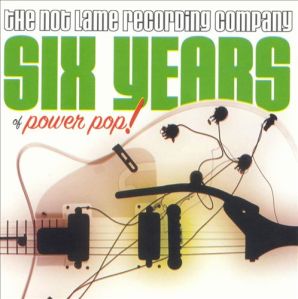 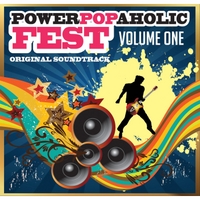 Powerpop compilations are a good bargain. You get a lot of songs, by a lot of different artists. They’re inexpensive. You get an “instant playlist” created by someone else. You also get to sample tracks you may have overlooked or never knew even existed.

The International Pop Overthrow CDs — coniciding witht the annual multi-city Powerpop festivals of the same name — are well-known in this regard. Not Lame Recordings released several spectacular Powerpop complilations before closing its doors in 2010. SymPophony #1 and its Six Years Of Powerpop are particularly noteworthy. The company’s former owner, Bruce Brodeen, continues to release compliations through his new venture, Pop Geek Heaven.

The “Original Soundtrack” to the Powerpaholic Fest held this past September in Port Jefferson, New York, is a newcomer to the field, and its also a good one. The collection is put out by the folks behind the Powerpopaholic blog, which has been listed on the blogroll on the right-side of this page for the past year.

The really good stuff in this set comes early.

Lannie Flowers kicks off the set. “Give Me A Chance,” from his 2008 release Same Old Story, itself appears on at least two Powerpop compilations that I have, and for good reason. Its a jangle pop classic that will stew around in your mind for days and days. “Come On Girl,” on this collection, is in the same vein with its perfect melodic hooks and jangly guitars right out of 1965. Here it is:

Cliff Hillis, who sang and played on Starbelly’s classic 1998 release Lemonfresh — about which I wrote recently on another site — contributes “Taking Tree” from his recent release, Dream Good. The song conjures XTC and late-60s Kinks, and throws in short, bouncy beats to keep you bopping.

“Every Now And Then” by The Honeymoon Stallions sound like a lost track from John Lennon’s Double Fantasy. “Bawl And Change” by King Washington harkens to the early-70s days of Badfinger and Big Star. Eytan Mirsky’s “Another Week Or Two” is pure pop goodness that flies by in its 3 minutes, 41 seconds.

Is everything on the “Original Soundtrack” as good as those five songs? Of course not. But the collection runs the gamut of the broad genre of Powerpop, from simple songs with loud, fast bright and shiny guitars to introspective pieces with more complex arrangements.

In a perfect world, the set would give you 18 big fat hits by 18 original artists, just like the old K-Tel collections from the 1970s. The Powerpopahlic folks even made their own “K-Tel style commercial” to commemorate the release:

Go check out the Powerpopaholic “Original Soundtrack.” Complete tracks can be sampled, and the entire collection purchased in any format you desire, on Bandcamp. And, for good measure, all profits go to Sandy relief efforts.