Archive for the tag “Toxic Melons”

Like Loading...
Posted in Music and tagged Chris Richards and the Subtractions, Gen Pop, Power Pop, Powerpop, Sugar Stems, The Clash, The Cleaners From Venus, The Click Beetles, The Hazey Janes, The Jam, Toxic Melons, Translator | Leave a comment 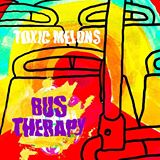 The last post on this site discussed five tracks that proved to be quite popular in the inaugural month of Pop That Goes Crunch radio. One of the highlighted tracks is “Diffidence” by Toxic Melons. I’ve now had a chance to listen to the soon-to-be released Bus Therapy by Paul Fairbairn and pals in its entirety. It is one of the most wildly eclectic pop albums you likely will hear this year, or any other year for that matter. A Kickstarter campaign is nearing its conclusion. Here’s why you should happily contribute to this effort, as I did last month.

Fairbairn says on the Kickstarter page “if you’re a fan of The Beatles, Jellyfish, Queen, The Beach Boys, E.L.O and Power Pop in general, I think you might enjoy the album!” Indeed you will as Bus Therapy takes you on a dizzying roadtrip through the last five decades of pop music in just thirty-three minutes.

The festivities begin rather quickly with “More Or Less,” a song about accepting that not everything in life is black or white but enjoying the “bumper ride” anyway, propelled by swirling keyboards and copious harmonies. “Journey” takes us on the first of many wide left turns — a slow instrumental right up front. “Let Me Sleep” is, well, a rather sleepy track about begging to sleep for another ten minutes and features a nicely placed glam flourish here and there.

“Change The World” is sung beautifully throughout by Linus Of Hollywood. Fairbairn’s keyboards and accordion, and the overall waltzing tempo of the track, give the whole thing a wonderfully circus-like feel.

Keith Klingensmith lends his pitch perfect vocals to the rather jaunty “Not In Love?” which, as far as I can tell, must have knocked an Elton John song off of the top spot on Billboard charts back when I was in elementary school. Like “Change The World,” it also has been added to Pop That Goes Crunch radio.

“Getting Old” wraps piano, strings and trumpet around decidedly craggy vocals about fighting the inevitable. Quite naturally, then, the track is followed by the closer, “Take Me Back” a bit of sublime Beach Boys pop nostalgia about days gone by.

You can stream the whole thing right here:

More then 500 hours of music was heard in the first month at Pop That Goes Crunch radio. More than 1,200 individual streams were launched, and the station page itself was visited more than 1,000 times. Its the third most popular “Power Pop” station on Live365 — not bad for the first month.

Here are five more tracks spinning in rotation that proved to be among the most popular songs in the first month. This is music that should be heard. You can hear it in this post — full tracks are embedded below — and you certainly can hear it on the station.

The Bye Bye Blackbirds — “All In Light” — This Bay Area band had the Number 10 song on my Best of 2013 list. “All In Light” opens their We Need The Rain long-player in a pounding, fist-pumping fashion before settling into three-plus minutes of hooks and harmonies:

And The Professors — “Our Postmortem” — This collective led by Adam Levy of The Honeydogs snagged the Number 8 song on my Best of 2013 list. The title track of their 2013 release closes that effort with a bit of Wilco-meets-ELO string-based rock:

The Shivvers — “Teen Line” — Now we’re shifting gears radically. This piece of stripped down old school Power Pop from 1980 becomes increasingly brilliant each time its heard. I could have embedded a simple audio track. Here, however, is the band kicking out the song sometime in the distant past on WMTV in Madison, Wisconsin:

The Loud Family — “Chicago And Miss Jovan’s Land-O-Mat”: Scott Miller’s original band, Game Theory, is a favorite and is well-represented on Pop That Goes Crunch radio. Although there is not necessarily anything “Midwestern” about this track that appears on Volume 4 of the Yellow Pills collection, this perfect piece of AM pop rock somehow transports me to Chicago whenever I hear it:

So, there’s another five rather popular tracks getting some serious airplay over at the radio station. Why not take a few minute and check it out?